At the Side of Torture Survivors. Treating a Terrible Assault on Human Dignity PDF 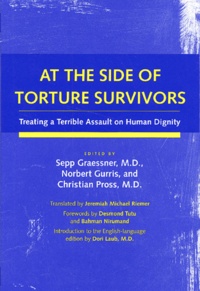 NOM DE FICHIER: At the Side of Torture Survivors. Treating a Terrible Assault on Human Dignity.pdf

Survivors of torture and other human-rights violations from the former Yugoslavia, Turkey, the Middle East, Southeast Asia, and other regions require medical, social, and psychotherapeutic assistance. Unfortunately, torture survivors often meet with silence and disbelief from others-a profound unwillingness to confront the reality of their suffering. The very nature of torture, which destroys the dignity and well-being of its victims, often makes survivors themselves doubt this reality : as a result, they feel completely alone and may no longer believe in the possibility of human communication. Available for the first time in English, At the Side of Torture Survivors provides an intimate portrait of the difficulties facing torture survivors and the therapists who strive to help them. Written by specialists at the Berlin Center for the Treatment of Torture Victims, the book covers topics ranging from physical rehabilitation to advocacy for those seeking asylum and justice. The authors describe traumatic aftereffects of torture, such as memory loss, nightmares, and psychosomatic disorders, and outline therapeutic treatments such as dream therapy and storytelling. Throughout, the authors document their work without hiding the limits and failures that often accompany it. They tell of the difficulty of diagnosing torture symptoms, discuss the problems impeding therapeutically effective contact with torture victims, and reflect on the burdens faced by therapists themselves.

NOM DE FICHIER: At the Side of Torture Survivors. Treating a Terrible Assault on Human Dignity.pdf

Human Rights Quarterly (HRQ) is widely recognized as the leader in the field of human rights.For more than a quarter of a century, HRQ has published articles by experts from around the world writing for the specialist and non-specialist alike. The Quarterly provides up-to-date information on important developments within the United Nations and regional human rights organizations, both ...

A 'read' is counted each time someone views a publication summary (such as the title, abstract, and list of authors), clicks on a figure, or views or downloads the full-text.